Spread the love
Sable is the most common and cinnamon is the rarest, but ferrets come in a myriad of color patterns. There are eight basic ferret colors: Albino, Black, Black Sable, Champagne, Chocolate, Cinnamon, Dark-Eyed White, and Sable. 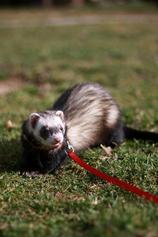 Sable
Sable is perhaps the most common color of ferret. It’s the common “raccoon” patterning, or, dark brown to black guard hairs with a creamy undercoat.
In the UK, this color is often called “polecat”
Bandit (left) was a sable 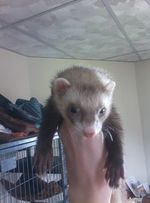 Chocolate
A chocolate ferret may have the same coat pattern as a sable, with a white/cream undercoat but the guard hairs are warm chocolaty color.
Owen (left) is a chocolate 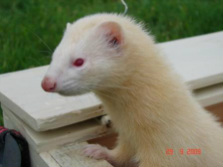 Albino
Albino ferrets have a white coat, with red or pink eyes 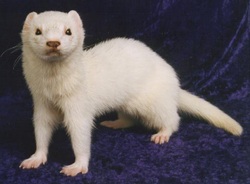 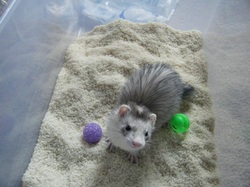 Silver
Silver is a ferret with a white undercoat, but grey/silver guard hairs. The American Ferret Association calls this color “Black Roan”. Silvers may age out to DEW’s.
Percy (left) and Wesley are silvers. 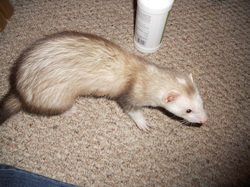 Champagne
The guard hairs are tan or diluted chocolate, almost sandy colored. The undercoat is white or cream.

Marked White
Marked whites are DEW or albino ferrets with irregular, dark markings on them. This may include spots, rings around the tail, etc. A short tail with a ring may indicate Waardenburg’s Syndrome (also, blaze and panda) 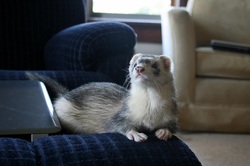 Mitt
Ferrets with mitts have white toes or feet.
Here is Wesley showing off his mitts. His full color & pattern combo is “silver mitt” or “black roan mitt” 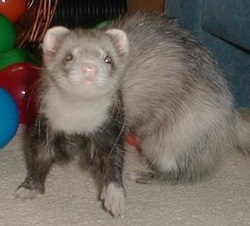 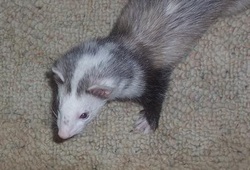 Blaze
A stripe on the top of the head, sometimes extending to the shoulders. Also called badger.
Note that ferrets with a blaze are prone to Waardenburgs Syndrome- basically, they are more apt to be deaf. 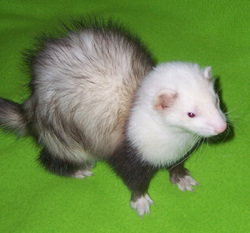 Panda
An all-white head that extends to the shoulders. Note that ferrets with the panda markings may be prone to Waardenburgs Syndrome- basically, they are more apt to be deaf.

Getting Active With Your Ferret